The Wyandot Mission Church - Celebrated 200th Year of Ministry in 2016 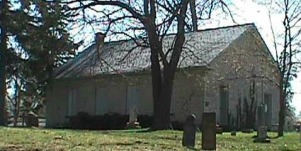 The Wyandot Indian Mission was founded by John Stewart in 1816.  Three years later, the Wyandot Mission became the first officially recognized mission of the Methodist Episcopal Church in America.  The stone mission church was built in 1824 under the supervision of the Rev. James B. Finley. 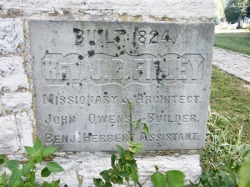 Old Mission sign
The Wyandot Indians worshiped at the Mission Church until 1843. Squire Grey Eyes address on July 12, 1843.  The building was restored in 1889 and designated a national historic shrine by the General Conference of the Methodist Church in 1960.  An Ohio historical marker has been placed at the Mission Church in celebration of Ohio's bicentennial  Wyandot County landmark is open during the summer months of June, July and August.  Worship services are held at 8 a.m. each Sunday.The Mission Church is open from 1-4 p.m. each Friday, Saturday and Sunday afternoon. 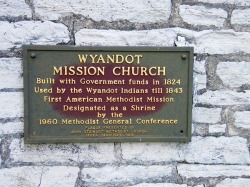